In my last blog, I wrote that applications that have been running on x86 might need to undergo some adaptation if they are to be run on a different architecture such as ARM. Let's see what it means exactly.

Recently I have been playing around with PostgreSQL RDBMS using an ARM64 machine. A few months back, I even didn't know whether it can be compiled on ARM, being oblivious of the fact that we already have a regular build farm member for ARM64 for quite a while. And now even the PostgreSQL apt repository has started making PostgreSQL packages available for ARM64 architecture. But the real confidence on the reliability of PostgreSQL-on-ARM came after I tested it with different kinds of scenarios.

I started with read-only pgbench tests and compared the results on the x86_64 and the ARM64 VMs available to me. The aim was not to compare any specific CPU implementation. The idea was to find out scenarios where PostgreSQL on ARM does not perform in one scenario as good as it performs in other scenarios, when compared to x86.

Following was common for all tests : 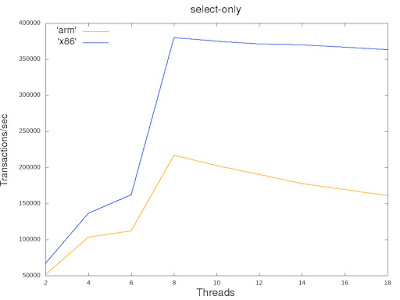 Between 2 and 4 threads, the x86 performance is 30% more than ARM, and the difference rises more and more. Between 4 and 6, the curves flatten a bit, and between 6 and 8, the curves suddenly become steep. After 8, it was expected to flatten out or dip, because the machines had 8 CPUs. But there is more to it. The pgbench clients were running on the same machines where servers were installed. And with fully utilized CPUs, the clients took around 20% of the CPUs. So they start to interfere from 6 threads onward. In spite of that, there is a steep rise between 6 and 8, for both ARM and x86. This is not yet understood by me, but possibly it has something to do with the Linux scheduler, and the interaction between the pgbench clients and the servers. Note that, the curve shape is mostly similar on both x86 and ARM. So this behaviour is not specific to architectures. One difference in the curves, though, is : the ARM curve has a bit bigger dip from 8 threads onward. Also, betweeen 6 and 8, the sudden jump in transactions is not that steep for ARM compared to x86. So the end result in this scenario is : As the CPUs become more and more busy, PostgreSQL on ARM lags behind x86 more and more. Let's see what happens if we remove the interference created by pgbench clients.

So, to get rid of the noise occurring because of both client and server on the same machines, I arranged for testing exactly what I intended to test: query performance. For this, pgbench clients can run on different machines, but that might create a different noise: network latency. So instead, I wrote a PostgreSQL C language user-defined function that keeps on executing in a loop the same exact SQL query that is run by this pgbench test. Execute this function using the pgbench custom script. Now, pgbench clients would be mostly idle. Also, this won't take into account the commit/rollback time, because most of the time will be spent inside the C function.

pgbench custom script : select exec_query_in_loop(n);
where n is the number of times the pgbench query will be executed on the server in a loop.
The loop query is the query that gets normally executed with pgbench -S option:
SELECT abalance FROM pgbench_accounts WHERE aid = $1
Check details in exec_query_in_loop() 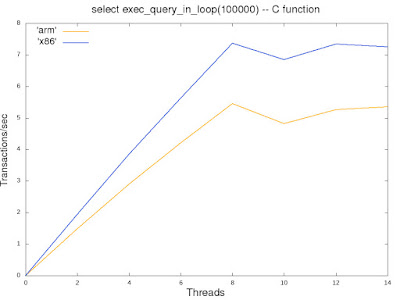 Now, you see a very different curve. For both curves, upto 8 threads, transactions rate is linearly proportional to number of threads. After 8, as expected, the transactions rate doesn't rise. And it has not dipped, even for ARM. PostgreSQL is consistently around 35% slower on x86 compared to ARM. This sounds not that bad when we consider that the ARM CPU frequency is 2.6 GHz whereas x86 is 3.0 Gz. Note that the transaction rate is single digit, because the function exec_query_in_loop(n) is executed with n=100000.

This experiment also shows that the previous results using built-in pgbench script have to do with pgbench client interference. And that, the dip in curve for ARM for contended threads is not caused by the contention in the server. Note that, the transactions rates are calculated at client side. So even when a query is ready for the results, there may be some delay in the client requesting the results , calculating the timestamp, etc, especially in high contention scenarios.

Before using the user-defined C function, I had earlier used a PL/pgSQL function to do the same work. There, I stumbled across a different kind of performance behaviour. 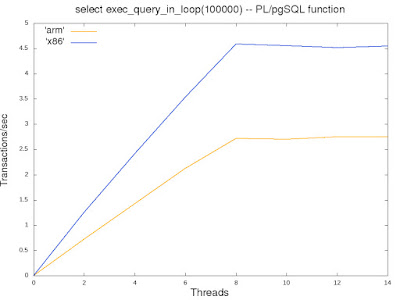 Here, PostgreSQL on ARM is around 65% slower than on x86, regardless of number of threads. Comparing with the previous results that used a C function, it is clear that PL/pgSQL execution is remarkably slower on ARM, for some reason. I checked the perf report, but more or less the same hotspot functions are seen in both ARM and x86. But for some reason, anything executed inside PL/pgSQL function becomes much slower on ARM than on x86.

I am yet to check the cache misses to see if those are more on ARM. As of this writing, what I did was this (some PostgreSQL-internals here) : exec_stmt_foreach_a() calls exec_stmt(). I cloned exec_stmt() to exec_stmt_clone(), and made exec_stmt_foreach_a() call exec_stmt_clone() instead. This sped up the overall execution, but it sped up 20% more for ARM. Why just this change caused this behaviour is kind of a mystery to me as of now. May be it has to do with the location of a function in the program; not sure.

The default pgbench option runs the tpcb-like built-in script, which has some updates on multiple tables. 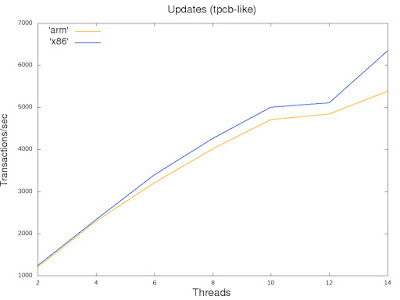 Here, the transaction rate is only around 1-10% percent less on ARM compared to x86. This is probably because major portion of the time goes in waiting for locks, and in disk writes during commits. And the disks I used are non-SSD disks. But overall it looks like, updates on PostgreSQL are working good on ARM.


Next thing, I am going to test with aggregate queries, partitions, high number of CPUs (32/64/128), larger RAM and higher scale factor, to relatively see how PostgreSQL scales on the two platforms with large resources.

We saw that PostgreSQL RDBMS works quite robustly on ARM64. While it is tricky to compare the performance on two different platforms, we could still identify which areas it is not doing good by comparing patterns of behaviour in different scenarios in the two platforms.
at May 21, 2020

PostgreSQL 13 has introduced a simple but extremely useful capability to log a stack trace into the server logs when an error is reported. L...